Venezuela’s Bolivarian Revolution is much bigger than Hugo Chávez; it is a movement of millions. The movement that drives the process forward long predates his election and his failed 1992 coup.

Saying this should not come as a revelation, for no large-scale social movement can exist as a personal vehicle, nor can any one person, no matter how charismatic, single-handedly carry the responsibility for social change, especially when that change has the long-term, open goal of supplanting the global capitalist order. 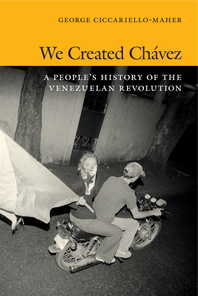 Contrary to the myopic, superficial corporate-media narrative of a caudillo motivated by a fathomless desire to poke Uncle Sam in the eye (although we must immediately ask how a leader who won 16 of 17 national elections, almost all by at least 10 percentage points, can be a “dictator”), the Bolivarian Revolution is a continuation of struggles that have been waged since the late 1950s. The defining moments, George Ciccariello-Maher argues in We Created Chávez: A People’s History of the Venezuelan Revolution,* are not President Chávez’s electoral victories but rather two outbursts of people’s power, a 1989 uprising and the 2002 uprising that re-installed him, reversing the business coup.

The Bolivarian Revolution can’t be understood without a bottom-up perspective, without analysis of the pressure from below that buffeted President Chávez, pushed forward by organizations that support the revolution. Professor Ciccariello-Maher, as his book’s title signals, provides that necessary background:

“Hugo Chávez is not a cause but an effect, not Creator but creation; in this sense, the history that follows is literally a defetishization, a demystification. His election and even his failed coup did not mark the beginning of the Bolivarian Revolution, but were instead the results and reflection of its long and largely subterraneous history.” [page 21]

That history has roots two centuries old, and the modern manifestation of Venezuelan struggle begins in the late 1950s, ironically with the downfall of Venezuela’s last dictator and the establishment of a formally “democratic” republic. Marcos Pérez Jiménez was overthrown in 1958, replaced by a two-party system designed to stifle popular participation. The “social democratic” party, Acción Democrática — unusually ruthless in attacking its base even by the standards of world social democracy — mostly was in power, alternating with Copei, the Christian democrats.

Acción Democrática leader Rómulo Betancourt won office in the first post-Pérez Jiménez election. Within a year, his government was shooting people dead in the streets and ruling under states of emergency. Violent repression was the swift response by the new president to his unpopularity; repeated massacres sparked uprisings across the country. A revolutionary situation developed, but Professor Ciccariello-Maher argues that the Venezuelan Communist Party waited too long while the Revolutionary Left Movement went too soon. A series of tactical mistakes doomed this armed struggle, not least of which was a lack of connections with the people, the author writes.

A series of groups blossomed and declined, rural guerrilla strategies failed, the electoral Left floundered, and mass fronts and other popular organizations faced severe state repression during the following years. The net of state repression was cast steadily wider — the government provided little services but attacked those who asked for them. Out of this situation, barrio assembles and popular militias began to be organized for self-defense; the latter forcibly ended the drug trade in neighborhoods in which they operated. These popular organizations organized sporting and cultural activities, and expelled the police — their militancy propelled people forward.

Professor Ciccariello-Maher argues that the 1989 uprising known as the “Caracazo” is the first of two “ruptures” (the 2002 coup reversal the other) that are the critical moments in the process that is the Venezuelan Revolution. Carlos Andrés Pérez took office as president that year as the Acción Democrática candidate on an explicitly anti-International Monetary Fund platform. It took him two weeks to jettison his campaign pledges and impose the full IMF-dictated austerity package. Riots broke out the morning of imposition, led by informal workers. But because political organization was widespread, these were not blind lashings-out — the target of the anger quickly went from bus drivers (a doubling of oil prices prompted large fare increases) to the state and its system.

A curfew was declared the next day, and a violent crackdown ensued, with as many as 3,000 left dead. The author leaves no doubt as to the severity of the government crackdown:

“Known organizers were dragged from their homes to be either executed or ‘disappeared,’ and when security forces met resistance from rooftop snipers, they sprayed entire apartment blocks with automatic machine guns. … The human toll of the rebellion has never been fully revealed, especially because the Pérez government subsequently obstructed any and all efforts to investigate the events. … A recent study has shown that some four million bullets were fired to quell the rebellion, and the Relatives of Victims Committee, an organization founded around the victims of the Caracazo, reports that 97 percent of the documented victims died in their own homes.” [pages 96-97]

The author writes that the Caracazo crystallized and focused organized opposition within the military while civilian armed groups sought to unify the popular militias with the military opposition. By 1991, barrio assemblies in Caracas were organizing and coordinating opposition. The military uprisings in February and November 1992 (the former the one led by Hugo Chávez) were the “detonators” for subsequent popular rebellions. State repression could not break popular control of the streets, and these social movements led to the 1998 election of President Chávez.

“[D]efeat notwithstanding, the Caracazo sounded the death knell of the old system, simultaneously reflecting and contributing to the inevitability of its collapse and thereby setting into motion the entire process that came after it. In symbolic terms, it smashed in a single stroke the façade of [Venezuelan] ‘democratic exceptionalism,’ revealing the bankruptcy and the violence of the existing system for all to see. Neither completely spontaneous nor fully organized, the Caracazo was an instant in which widespread disgust and revolutionary capacity met on the streets, generating historical agency by emboldening the faithful and converting the waverers: it was 1989 that enabled 1992, and 1992 that enabled 1998.” [page 89]

The author’s second moment of rupture, the reversal of the 2002 business coup against President Chávez after two days, was a product of the connections between militias and military, of political understanding and experience. Millions poured into the center of Caracas in defiance of the coup. Venezuela’s corporate media had unleashed an orgy of lies before and during the coup; the state television channel was closed while the private media blacked out any coverage of the mounting resistance. The coup leader, Pedro Carmona Estanga, the head of the national chamber of commerce, dissolved all branches of government and declared the 1999 constitution void, despite its having been approved by 72 percent of the electorate.

Loyalist military units, taking their cues from the mass popular resistance to the coup, took the presidential palace back, with officers giving the credit to the people and their “spontaneity” — but the “spontaneity” was the product of years of organizing, with Left activists seeking much more than the mere return of President Chávez to the palace.

“[M]ass spontaneity, while fundamental in its importance, is often the result of serious organizing that, in the case of Venezuela, spans decades. As with the Caracazo, then, this spontaneous mobilization and its spontaneous grasp of the strategic realities of the situation it confronted should not lead us merely to a panegyric of spontaneity for spontaneity’s sake. Rather, every moment of this spontaneity and every gesture of these spontaneous masses contained an aspiration toward increasingly conscious organization. In this explosive dialectic between spontaneity and organization that was resistance to the 2002 coup, such conscious effort would be especially important in the realm of mediatic and popular armed organizing.” [pages 172-173]

Struggle within the struggle

Can an engaged people go back to the ancien régime? We Created Chávez was published just before Hugo Chávez’s untimely death, but given the context of this story the president’s passing in no way renders the book out of date. The modern history of Venezuela is that of regularly employed workers, informal workers, peasants, students, women, Afro-Venezuelans and Indigenous peoples in a many-sided struggle against domestic elites and the country’s subaltern status in global capitalism. Then there is the struggle within the Bolivarian Revolution.

There are tensions between economic and political demands, between workers’ autonomy and the state, over the nature and content of “co-management” and over if co-management is a step toward a higher level or a capitalist trick, as well as opposition to developing the Bolivarian process from managers and within the ranks of the movement.

What forms should workers’ control take? Some argue for state ownership with employee participation, others argue for full autonomy of enterprises and the workers in them, and there are gradations in between. Enterprises under state ownership presumably should be managed to benefit the community, but how much management should be ceded to the workforce? Should workers fortunate enough to work in the oil industry be able to reap benefits far in excess of other workers? How should autonomous enterprises be managed to benefit the community, not only those who work in them?

There are similarly serious questions regarding agriculture. Venezuelan land ownership remains highly unequal, with owners of large ranches in control of the countryside. Moreover, because the countryside emptied out and the economy grew overly dependent on the oil industry before 1998, the country lost its food sovereignty. This exodus to the cities has swelled the size of the informal workforce, who get by with street vending and whatever other means they can to survive.

Less than half of the workforce has formal employment, Professor Ciccariello-Maher writes, but although the Chávez government had difficulty with informals, to the point of occasional hostility, the author argues that this sector has been the staunchest base of support for the revolution and is neglected at the government’s peril. Informal workers played no small role in reversing the 2002 coup, for example.

There is no stasis

Ultimately, the revolution can only succeed through creating mechanisms for self-government. “Patriotic Circles” became Bolivarian Circles after 1998, and were tasked with drafting and defending the 1999 constitution. Communal councils (local bodies that manage policy and projects in their communities) came into existence after a 2006 law. These are legally on par with state institutions and have oversight over them; these are views as potential replacements for the state bureaucracy. The councils are linked horizontally to one another and vertically in communes with a goal of them exercising sovereignty.

Due to the timing of the book, the author concludes with an analysis of President Chávez’s “complex and nuanced position” as someone who is not purely a representative of the state but also an ally of the social movements that have driven Venezuela forward in past decades:

“[M]ore often than not he has pushed a radical agenda that facilitates the transformation of that state, a fact most visible in the recent development of communal councils and popular militias. Here there are no guarantees, and despite the fact that the collective ‘we’ of the Venezuelan revolutionary movements … ‘created him,’ this does not mean the creation will not betray the creators. However … to do so would certainly require a fight.” [pages 254-255]

The necessity of struggle to deepen the revolution is unchanged by the president’s death. Social movements have driven the process forward, and will continue to do so, regardless of who occupies the palace. We Created Chávez is indispensable toward understanding the process that is the Bolivarian Revolution and the path taken by Venezuela.

2 comments on “Venezuela’s revolution is a process propelled by millions, not one leader”