Corporate globalization is an international phenomenon by definition that is commonly opposed on nationalist lines. A process imbedded in capitalist competition and advanced by the industrialists and financiers who directly benefit from it, however, transcends borders.

Understanding corporate globalization is necessary to developing strategies to effectively counter it, and relying on nationalist arguments is a barrier to grasping the systemic nature of globalization, argues Martin Hart-Landsberg in his just released book Capitalist Globalization: Consequences, Resistance and Alternatives.* All too often, he writes, activists fall back on pointing fingers at China or similar nationalistic talking points, thereby obscuring the true culprits in the global race to the bottom. 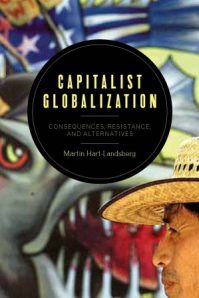 By doing so, activists not only erode their potential effectiveness by not prioritizing cross-border alliance building, they drag the spotlight away from the trans-national corporate elite who drive the process.

Multi-national corporations that have transferred production to China account for most of China’s exports, including the vast majority of high-tech exports, to which China contributes very little. Professor Hart-Landsberg writes:

“China is the world’s number one exporter of computers. Yet China’s contribution to this activity is limited to providing cheap labor and land. … [E]ight of China’s top ten exporters are now Taiwanese [manufacturers] that supply ‘branded [personal computer] sellers such as Dell with unbranded computers and components.’ … China’s rise as an export powerhouse is primarily due to its position as the final assembly platform for transnational corporate cross-border production networks.” [pages 45-46]

That doesn’t mean that Taiwanese manufacturers reap the lion’s share of the profits that accrue from these cross-border production networks. Those companies, such as Foxconn, are contractors to Western and Japanese companies including Apple, Microsoft and Hewlett-Packard that take most of the money. Only US$6.50 of the US$179 cost of an iPhone is generated by China (due to extremely low Chinese wages). Thus, the author determines that China’s true net trade gain from the iPhone is $73 million, not the $1.9 billion of standard trade calculations:

“In short, although national accounting implies that China is the big winner and the United States the big loser, in reality the profit generated by the production and sale of iPhones was largely captured by a select few transnational corporations, none of which are Chinese, with Apple, a U.S. company, the biggest winner.” [page 22]

All of East Asia is increasingly dependent on exports. Other East Asian countries are tied, especially, to the United States because their production is oriented toward making components that are shipped to China, which in turn is heavily dependent on exporting to the U.S. Chinese demand has raised the prices of commodities, which has some benefit for Latin American and African countries reliant on exporting raw materials, but at the cost of stifling their efforts at industrial development. Chinese policies that exploit domestic labor not only force wages down regionally, but crowd out production elsewhere in East Asia — production has become geared to making parts that are shipped to China for final assembly rather than done to meet domestic needs.

Highly exploited workers in China not only receive ultra-low wages, but are increasingly precarious — virtually all job growth in China from 1990 to 2002, the author writes, was in irregular employment.

The disastrous results for workers from “free trade” agreements has been replicated around the world. Professor Hart-Landsberg, in a chapter devoted to analyzing the South Korea-United States Free Trade Agreement, cites a study finding that the U.S. will lose 159,000 jobs due to the pact from 2008 to 2015, and a separate study that found that from 1998 to 2008 U.S. exports to countries that did not have a “free trade” agreement with the U.S. grew as fast as double the rate to countries with “free trade” agreements. The percentage of South Korean workers with irregular employment has increased from 40 percent before 2000 to more than 60 percent in 2008, while the Korean economy has become more dependent on exports.

Nor have the results been better elsewhere. For the developing world as a whole (other than China), the average growth rate in the 1990s is two percentage points lower than it was in the 1970s, while trade deficits are larger.

Given the inevitable falling wages, eroding manufacturing bases and waves of dislocation — only part of the fallout from the race to the bottom resulting from corporate globalization — how is it that “free trade” agreements are invariably promoted with “predictions” promising miraculous growth in jobs and benefits? This is self-serving nonsense, yes, but it goes beyond that: “Free trade” is based on ideology and ridiculous assumptions, not scholarship.

As a result of these specious starting points, the author writes:

“[T]his kind of modeling assumes a world in which liberalization cannot, by assumption, cause or worsen unemployment, capital flight or trade imbalances. Thanks to these assumptions, if a country drops its trade restrictions, market forces will quickly and effortlessly lead capital and labor to shift into new, more productive uses. And since trade always remains in balance, this restructuring will generate a dollar’s worth of new exports for every dollar of new imports. Given these assumptions, it is no wonder that mainstream economic studies always produce results supporting ratification of free trade agreements.” [page 104]

This is standard Chicago School ideology, the leading source of justification for the wish lists of the biggest industrialists and financiers. The South Korea-United States Free Trade Agreement, for example, bans either government, when soliciting bidders for contacts, from giving consideration to corporate policies on the environment or labor, and prohibits buy-local policies, financial regulations, capital controls or “indirect expropriations.” These tend to be replicated in other “free trade” deals.

Although such policies are detrimental to working people in each of the countries, Professor Hart-Landsberg strongly cautions against portraying such deals as merely “flawed,” rather than as fundamental attacks on working people and a continuation of capitalist assaults. He argues that the effectiveness of Korean and U.S. movements against the agreement was weakened because activists in both countries tended to stress nationalistic themes. The United Auto Workers union, for example, reversed its initial opposition in exchange for Korea weakening its fuel and safety standards and the U.S. delaying tariff reductions on Korean vehicles while failing to address the larger structural issues.

Similarly, arguments that point fingers at China imply that there is nothing wrong with “free trade” policy or U.S. capitalism, the actual drivers of the race to the bottom.

The author argues that movements must build toward the future and point toward a society built on different grounds while responding to immediate needs. A shared vision of the future should include struggles to expand the public sector as part of a fight for social property. Public education must be a priority, both as a social goal and as opening spaces for teaching social skills.

“Successful movement building involves creating strong, accountable, and politicized organizations; a community-based structure that connects these organizations; and a common commitment to struggle based on a shared vision of the future.” [page 148]

Human liberation can only be built on principles of equality, democracy and solidarity. One component of such orientations is to use strategies in combating capitalist ills such as sweatshops and low labor standards that go beyond mere reforms but rather aim at confronting and opposing the capitalist system that spawns them.

“The potential of … anti-sweatshop struggles lies in the fact that they encourage resistance to the corporate dominance of education, promote student-labor alliances, and strengthen international solidarity. They also draw new people into political movements for change.” [page 152]

No country, however, can be a socialist island — it is impossible for any single country to de-link from the world capitalist system. Regional developmental strategies are needed. The author, in his final chapters, discusses South America’s Bolivarian Alliance for the Americas (ALBA) and Bank of the South, and the post-World War II European Payments Union system dissolved in the 1950s. It would have been preferable if Professor Hart-Landsberg had attempted to sketch out ideas for what a regional system of mutual development might look like rather than concentrate on an example like the payments union that he admits is “not a blueprint” and also flawed because it was designed to liberalize trade even if it did provide European industry protection from U.S. dominance.

Nonetheless, the author’s discussion of ALBA is valuable. ALBA pursues national projects that enhance the conditions of working-class majorities, finances and facilitates production and infrastructure projects, and enables cooperative trading of expertise and resources. On the other hand, he argues, the eight-nation bloc is overly dependent on Venezuelan largesse and its top-down decision-making undercuts social and civil-society groups.

In extracting “lessons” from his discussion of ALBA, the author argues that movements must take state power seriously, not confining themselves to grassroots initiatives while leveraging community organizations to steer state policies in the proper directions. He also writes that critiques must be shifted from anti-neoliberalism to anti-capitalism, and educational work deepened — reliance on capitalist crises should not substitute for the work of building support for socialist alternatives.

The realization of such alternatives can not be other than a long-term struggle. But what choice does humanity have?

5 comments on “Conceptualizing globalization as a corporate elite project, not a nationalistic project”