It’s unanimous! The European Central Bank confirms that the only possible solution to falling wages and depressed spending is to throw more money at the banks and inflate another stock-market bubble.

The ECB thus joins the world’s other most important central banks in the hope that “quantitative easing” — a form of “trickle-down” economics — will somehow work despite having never achieved anything other than the inflation of asset bubbles, a benefit primarily to the one percent. Then again, perhaps that might explain it.

Mario Draghi, the president of the ECB, last week committed €1.1 trillion to buying eurozone government bonds and, to a lesser degree, asset-backed securities and pools of mortgage loans known as “covered bonds.” Starting in March, the ECB will buy €60 billion of assets a month, with a commitment to continue this program until September 2016. The ECB’s stated goal is to boost inflation and prevent deflation, while also driving down the value of the euro.

The European Central Bank joins the Federal Reserve, the Bank of England and the Bank of Japan in flooding the financial system with money, and joins all those central banks and the Swiss National Bank in attempting to drive down the value of its currency. One problem is that all currencies can’t decline against one another, any more than all countries can simultaneously produce trade surpluses. At the moment, it is the euro that is declining in value, which theoretically will give a boost to exports from eurozone countries, but as eurozone countries conduct most of their trade with one another, the boost from a weakened euro will not necessary be significant. 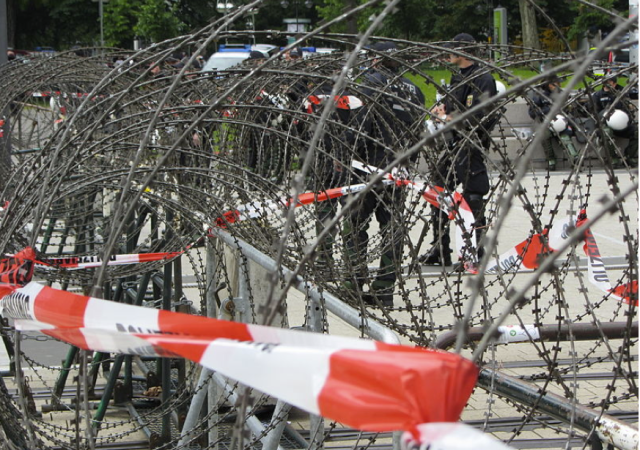 But with declining wages, fewer people have enough to spend, and the super-wealthy already have more money than they can possibly use for productive investment. Nonetheless, the “market” has decreed that more austerity for working people and more speculation by the one percent is the magic elixir that will finally fix the economy.

Fix it for whom? Let’s start to answer that question by noting the supposed purpose of quantitative-easing programs: to stimulate the economy by encouraging investment. Under this theory, a reduction in long-term interests rates would encourage working people to buy or refinance homes; encourage businesses to invest because they could borrow cheaply; and push down the value of the currency, thereby boosting exports by making locally made products more competitive.

In actuality, quantitative-easing programs cause the interest rates on bonds to fall because a central bank buying bonds in bulk significantly increases demand for them, enabling bond sellers to offer lower interest rates. Seeking assets with a better potential payoff, speculators buy stock instead, driving up stock prices and inflating a stock-market bubble. Money not used in speculation ends up parked in bank coffers, boosting bank profits, or is borrowed by businesses to buy back more of their stock, another method of driving up stock prices without making any investments.

We are not talking about small change here. In three rounds of quantitative easing, the Federal Reserve spent about $4.1 trillion. The Bank of England has spent £375 billion. The Bank of Japan, after boosting its QE program last October, will now spend ¥80 trillion (about US$680 billion) per year. This after 18 months of quantitative easing failed to revive the economy, as with an earlier QE program that ran from 2001 to 2006. In just the past 18 months, the Bank of Japan’s QE spending was ¥75 trillion ($640 billion).

Imagine what could have been done with these enormous sums of money had they been used for directly creating jobs, or simply by giving it directly to working people, who would have gone out and spent it. Or by putting the money to productive use, such as rebuilding crumbling infrastructure.

Instead, what is planned is more austerity — that is, more punishment. The other component of the European Central Bank’s January 22 announcement is that favorite term, “structural adjustment.” A euphemism used by the World Bank and International Monetary Fund when ordering an end to job security and social safety nets as a condition for granting loans to developing countries, this is now being applied to the global North. Near the end of his remarks announcing the quantitative easing, ECB President Draghi said:

“[I]n order to increase investment activity, boost job creation and raise productivity growth, other policy areas need to contribute decisively. In particular, the determined implementation of product and labour market reforms as well as actions to improve the business environment for firms needs to gain momentum in several countries. It is crucial that structural reforms be implemented swiftly, credibly and effectively as this will not only increase the future sustainable growth of the euro area, but will also raise expectations of higher incomes and encourage firms to increase investment today and bring forward the economic recovery.”

Labor “reforms” are necessary to “improve the business environment.” In plain language, that means more austerity in an effort to boost corporate profits. In the question-and-answer session after the announcement, President Draghi gave revealing answers to two different questions: “For investment you need confidence, and for confidence you need structural reforms” and “it would be a big mistake if countries were to consider that the presence of this programme might be an incentive to fiscal expansion. … This programme should increase the lending capacity of the banks.”

Firing workers and pushing wages lower will make capitalists feel better? Perhaps, but if there isn’t demand for their products, they still aren’t going to invest.

If consumers have no money, they aren’t buying

The ECB wishes to believe that further reducing job security and social safety nets will provide capitalists with the magic “confidence” that will prompt them to invest. But there is already plenty of industrial capacity sitting idle — E.U. manufacturing capacity utilization is only 80 percent while the E.U.-wide unemployment rate is 10 percent. The youth unemployment rate is 21.9 percent. More austerity isn’t going to reverse these effects of austerity.

The Bank of Japan boosted its quantitative easing program in October 2014 because it had not pulled the Japanese economy out of stagnation. Gross domestic product contracted in the second and third quarters of 2014. (Fourth-quarter statistics have yet to be reported.) Japanese wages have declined in the past year while profits have increased. Household spending in Japan had fallen for six consecutive months at the time of the Bank of Japan’s announcement, in part due to an increase in sales tax pushed through by Prime Minister Shinzo Abe.

The Federal Reserve’s quantitative easing has served to prop up a stock market that continues to rise despite ongoing stagnation. The standard measure of stock market valuation, the price/earnings ratio, remains high by historical standards. (This ratio is a company’s market value per share divided by earnings per share, or to put it another way, how many dollars a buyer pays for one dollar of profit.) The composite P/E ratio for the broadest measure of U.S. stocks, the S&P 500 Index, is 19.7. The rare times in history that ratio has risen above 20 has been followed by a crash.

Japan’s stock market has also risen during its quantitative easing; its benchmark Nikkei 225 Index has doubled since November 2012.

Trillions of dollars has been poured into programs that do little more than produce stock-market bubbles; more trillions have been poured directly into banks and other financial institutions for bailouts. The European Central Bank says more of the same, and European workers will continue to pay for it. The markets demand this, it is said. Capitalist markets, however, are nothing more than the aggregate interests of the largest industrialists and financiers — when we let “markets” make social decisions, that really means a dictatorship of big business and big banks. And supporting those banks is very expensive.