Capitalist ideology tells us that “democracy” means voting once a year, or every four years, after which we can congratulate ourselves for our participation in turning the wheels of government in one or the other direction.

I would be the last person to tell someone not to vote, but casting a vote ought to be the least of what we do. Around the world, we are given a choice among corporate candidates, a dismal prospect that, perhaps, is reaching its nadir this year in the U.S. presidential race that features two of the most unpopular candidates ever. 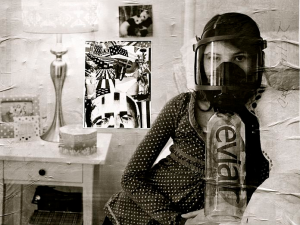 Well, we hope it won’t get worse, but the trend around the world is not encouraging. Canada has just elected its “hope” candidate, but so far Justin Trudeau has proven more style than substance, given his support for the Trans-Pacific Partnership, for CETA, for oil pipelines and much of the neoliberal agenda. In France, Francois Hollande seems determined to snuff out whatever good associations may still cling to the Socialist Party. In Britain, the Labour Party old guard seems to prefer committing suicide rather than accept the leadership of Jeremy Corbyn. No, we don’t want people joining our party in large numbers! Anything but that!

Back across the Atlantic, all signs point to a victory in November for the technocratic war monger over the misogynist ego maniac. Should Donald Trump somehow win the White House, there is little doubt that liberals would join leftists in massive protests. But why shouldn’t this be the case when Hillary Clinton takes office?

There is a belief among U.S. liberals that they shouldn’t give any “ammunition” to right-wingers by protesting a Democratic president. Or that they can gain access and persuade Democrats to “do the right thing” despite the corporate money that put them in office. Sometimes this extends to candidates. The idea of “Anybody But Bush” took hold in the run-up to the 2004 election, and although removing George W. Bush from office was a necessary goal, the narrowness of “Anybody But Bush” was exemplified when the liberal United For Peace and Justice coalition successfully steered the U.S. anti-war movement into becoming a wing of the campaign of pro-war candidate John Kerry. That movement was thereby snuffed out, never to regain its momentum.

We can’t afford to continue to make these kinds of basic mistakes. The only recourse to a Clinton presidency is to get in the streets on day one. If U.S. progressives don’t mobilize against Hillary Clinton’s White House the same way they would against a Republican president, then the widespread fear that her recent leftward shifts in response to Bernie Sanders are an election ploy that will quickly be forgotten will surely come true.

What we do in the streets, how movements respond, is what matters. The social gains of past decades did not come as manna from heaven or as gifts from politicians. They came as the result of organized struggle and a willingness to be in the streets, occupy workplaces and not allow business as usual. Without struggle, there is no advance, as Frederick Douglass put it succinctly.

Like social democracy in other parts of the world, North American liberalism has reached the point of exhaustion, having no way out of the trap of believing that capitalism can somehow be made nice with a few reforms. Neoliberalism is not the result of a cabal, nor an unfortunate turn by misinformed leaders. The neoliberalism the world has been living through the past few decades is the natural development of capitalism.

Nobody decreed “we shall now have neoliberalism” and nobody can decree “we shall now go back to Keynesianism.” The path to a better world will not be found in an election booth. That is not a reason not to vote, whether for a lesser-evil candidate as a short-term tactic or for a socialist candidate as a gesture of protest. But once election day is over, the real work begins, regardless of who takes office.