All of us who struggle for a better world are disheartened that so many advances of the 20th century have been lost. The mounting crises of the environment, the global economy and ever more constricted political systems are unmistakably moving humanity toward a cliff. And yet social movements, for all the victories here and there, again and again fail to sustain momentum.

Why are we in this predicament? No single person or organization can fully answer such a question, of course, but we do need to seriously reconsider what has been done and how. In this spirit, Marta Harnecker’s “Ideas for the Struggle” is a document that merits wide discussion. Originally written in 2004 and updated this year, the paper consists of 12 short, closely linked sections. And although written with Latin America in mind, the ideas are borderless. 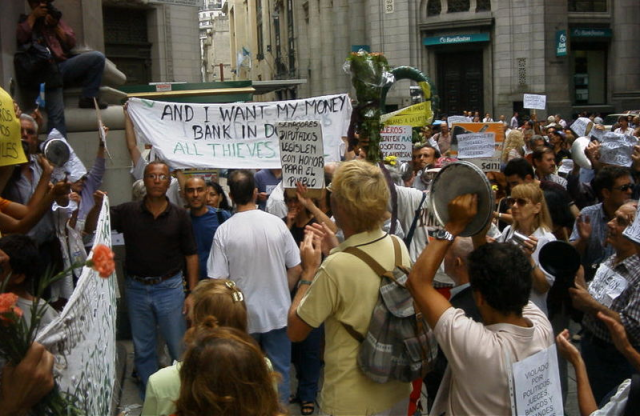 Argentines demonstrate against banks in February 2002 (photo by Usuario:Barcex)

Taking on the idea of spontaneity head on, Ms. Harnecker, a sociologist and activist since the 1960s, opens her paper by declaring that popular uprisings are insufficient in themselves. She writes:

“The recent and not so recent popular uprisings that rocked numerous countries across the world have clearly demonstrated that the initiative of the people, in and of itself, is not enough to defeat ruling regimes. Impoverished urban and rural sectors, lacking a well-defined plan, have risen up, seized highways, towns and neighborhoods, ransacked stores and stormed parliaments, but despite being able to mobilize hundreds of thousands of people, neither their size nor their combativeness have been enough to move from mass uprisings to revolution. They have overthrown presidents, but they have not been able to conquer power and initiate a process of deep social transformations.”

The example of successful revolutions, she argues, demonstrates that a “political instrument” capable of a national struggle is essential. To be effective,

“to convert mass uprisings into revolutions, a political instrument capable of overcoming the dispersion and fragmentation of the exploited and the oppressed is required: one that can create spaces to bring together those who, in spite of their differences, have a common enemy; that is able to strengthen existing struggles and promote others by orientating their actions according to a thorough analysis of the political situation; that can act as an instrument for cohering the many expressions of resistance and struggle.”

The past doesn’t have to be the future

That “political instrument” has to be welded anew and based on current, concrete conditions; people who believe that strong organizations are something to be avoided because many parties of the past engaged in authoritarian or manipulative political practices should not be trapped in the past. She writes:

“I believe it is fundamental for us to overcome this subjective barrier and understand that when we refer to a political instrument, we are not thinking about any political instrument; we are dealing with a political instrument adjusted to the new times, an instrument that we must build together. … We are talking about understanding politics as the art of constructing a social and political force capable of changing the correlation of force in favor of the popular movement, to make possible in the future what today appears impossible. We have to think of politics as the art of constructing forces. We have to overcome the old and deeply-rooted mistake of trying to build a political force without building a social force.”

By “social force,” Ms. Harnecker refers to the multitude of grassroots organizing that takes on particular struggles, including at local levels, and whose autonomy must be respected. A larger organization working on the broader project of building a revolutionary movement can only do so by working with these multitudes of grassroots movements. There can’t be a movement toward a better society without organic movements seeking to transcend the current society. This “construction of forces,” as the author defines this process, has to be conscious work. She writes:

“[T]his construction of forces cannot occur spontaneously; only popular uprisings happen spontaneously. It requires a political instrument that is capable of consciously building the required forces. … I envisage this political instrument as an organization capable of raising a national project that can unify and act as a compass for all those sectors that oppose neoliberalism. As an organization that is orientated towards the rest of society, that respects the autonomy of the social movements instead of manipulating them. And one whose militants and leaders are true popular pedagogues, capable of stimulating the knowledge that exists within the people — derived from their cultural traditions, as well as acquired in their daily struggles for survival — through the fusion of this knowledge with the most all-encompassing knowledge that the political organization can offer.”

Balancing debate with the necessity of action

How should such an organization develop its ideas? In what some readers would likely see as more controversial, Ms. Harnecker argues for democratic centralism. Although a term that is looked on with disfavor due to how the concept was badly distorted in 20th century communist parties, she argues that only through thorough democratic discussion can activists be prepared to carry out work, but that there also has to be strategic action rather than simply debate. She argues:

“This combination of a) a democratic debate at different levels of the organization and b) a single centralized leadership based on whatever agreements are arrived at by consensus or by majority vote is called ‘democratic centralism.’ I do not see how one can conceive of successful political action if unified action is not achieved around key issues. I do not see any other alternative to democratic centralism for achieving this, if consensus cannot [be] reached.

Only a correct combination of centralism and democracy can ensure that agreements are effective, because having engaged in the discussion and the decision-making process, one feels more committed to carry out the decisions.”

That a decision must be made and actions taken based on that decision does not mean an issue is closed in this conception. The minority must be allowed to continue to argue its case because that minority might be right, and if the majority is convinced it is right it should have no fear of further debate, the author writes. 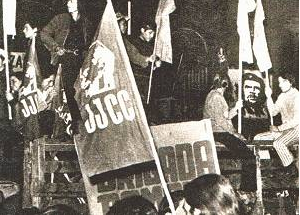 We should never under-estimate the isolation that the Bolshevik Revolution faced, nor the enormous challenges of modernizing a backward country while defending itself against a hostile capitalist world. Nor ignore the huge advances made in a country that went from a 20 percent literacy rate to producing more engineers than any other country in the span of two generations. Nonetheless, the political distortions imposed by first a single-person dictatorship and then a bureaucratic monopoly of power by a single party placed fatal fetters on Soviet development.

People can only solve their problems by freely discussing them, without coercion or manipulation, and then freely acting through coordinated activity based on the results of their discussion. In turn, there must be larger organizations that connect the many particular struggles into a broad movement, one that enables activists to see the links and commonalities between these struggles and the often common enemies that they face.

None of us possess a blueprint on how to build an effective mass movement. But one thing that ought to be clear, yet often isn’t, is that simply replicating the models of the past is a dead end. To return to Ms. Harnecker’s paper, she argues that no movement can be effective without consideration of capitalist hegemony in opinion manufacturing and the broad acceptance of capitalist rule that hegemony engenders. She writes:

“I am talking about a strategy that takes into consideration the important social, political, economic and cultural transformations that have occurred across the world in the last period. One that understands that the new forms of capitalist domination go far beyond the economic and state sphere, have infiltrated into all the interstices of society — fundamentally through the mass media which has indiscriminately invaded the homes of all social sectors, and in doing so changed the conditions of struggle. … The capitalist elites tend to achieve a significant hegemony over important popular sectors, a real cultural leadership over society; they have the capacity to ideologically subordinate the popular sectors, even those who are exploited by them. As [Noam] Chomsky says, propaganda is to bourgeois democracy what the truncheon is to the totalitarian state.”

Discussion of alternatives to capitalism must become more serious. Not only do social movements need to free themselves of forms of thinking imposed by capitalist hegemony, alternative spaces must be opened and successfully defended:

“[W]e must develop a process of popular construction opposed to capitalism in the territories and spaces won by the left, that seeks to break with the profit logic and the relations this imposes and tries to instill solidarity-based humanist logics. We must promote struggles that are not limited to simple economic demands — although these need to be included — but that advance the development of a more global, social project that encourages authentic levels of power from the grassroots.”

As I noted earlier, the author has written “Ideas for the Struggle” with the experiences of Latin America in mind, and some of the examples she provides are specific to that region. Nonetheless the ideas expressed (of which I have quoted only a very small sample) provides much material for discussion that is pertinent to any country or region. We do need to stop lamenting that we don’t know how to build an effective movement and start seriously discussing how we are going to build an effective movement.

If we don’t, barbarism will be the future. As the world’s resources are depleted, the environment is polluted beyond near-term remediation and ever more people are thrown into desperation — if we go on with capitalism, this is the path humanity will continue to walk — the industrialists and financiers who rule the world will surely have more intensive repression in store for us. If that is not the future we want, we’ll have to change it ourselves.

20 comments on “Building a better movement”