The corporation most determined to acquire control of the world’s food supply, a behemoth determined to bend the world’s farmers to its will, douse the world with pesticides and place genetically modified organisms on everyone’s dinner plate, Monsanto Company has long operated beyond effective control.

Although in no position to alter that status by itself, the International Monsanto Tribunal believes it could set an example of how international law could be used to counter the immense power of the company. The idea behind the tribunal, convened seven months ago, is that an international panel of legal professionals and practicing judges would provide victims and their legal counsel with arguments and legal grounds for further lawsuits in courts of law. 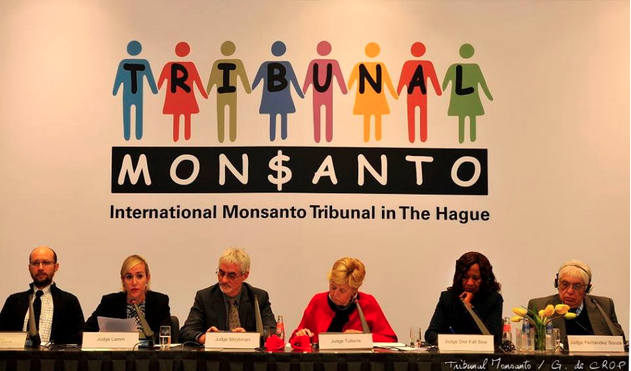 The tribunal, consisting of five international judges, has found Monsanto guilty. The tribunal is not a court of law and it has no power to enforce any judgment. The decision is a moral one, albeit grounded, the tribunal says, in international human rights and humanitarian law. The main conclusion drawn by the tribunal, which handed down its ruling on April 18, is this:

Monsanto was given the opportunity to participate in the tribunal, which took place in The Hague, but declined to do so. (In response to the tribunal’s decision, a Monsanto spokeswoman said the company “stand[s] committed to real dialogue with those who are genuinely interested in sustainable agriculture; human rights to food, health and a safe environment; who we are and what we do. The original event was staged by a select group of anti-agriculture technology and anti-Monsanto critics who played organizers, judge and jury. It denied existing scientific evidence and judicial outcomes on several topics; and was organized with a pre-determined outcomes. The opinion — characterized by the Tribunal panel itself as advisory only — was the anticipated next communication from this group.”)

Criticized around the world

Monsanto has come under sustained criticism from not only the organizers of the tribunal, but from a wide range of people around the world. Research questioning the safety of glyphosate has been published in dozens of articles in peer-reviewed journals. Numerous groups and researchers, who have no involvement with the tribunal, have issued reports and written books condemning Monsanto products and practices. Moreover, people will be participating in the annual March on Monsanto on May 20 in hundreds of cities in dozens of countries around the world. 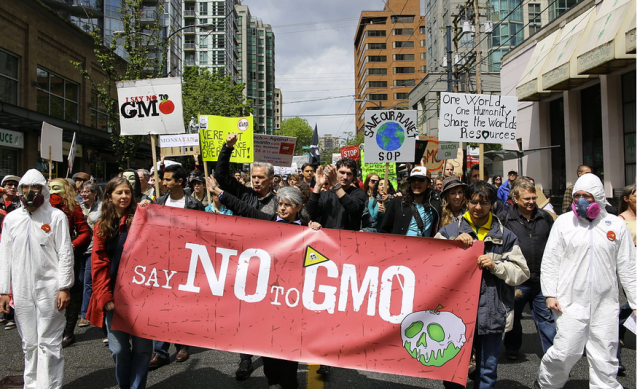 GMOs are inadequately studied and laws requiring GMO labeling of foods are fiercely opposed by Monsanto and other multi-national agribusinesses. GMO labeling is required by 64 countries, including Australia, New Zealand and all 28 EU countries. And Monsanto has relentlessly pursued a strategy of patenting seeds (as do other agribusinesses) as part of its effort to control farmers and every aspect of agriculture.

The International Monsanto Tribunal was specifically tasked with answering six questions regarding Monsanto’s behavior. Issuing its findings in a 60-page document, the answer was firmly negative on four questions, provisionally negative on a fifth while no decision was rendered on the remaining question due to a lack of relevant evidence. More than 30 witnesses and legal experts testified in the tribunal’s hearings, representing 17 countries on six continents.

Question 1: Did the firm Monsanto act in conformity with the right to a safe, clean, healthy and sustainable environment, as recognized in international human rights law?

The tribunal’s answer: “Monsanto has engaged in practices that have serious and negative environmental impacts. These impacts have affected countless individuals and communities in many countries, as well as the health of the environment itself, with its consequent impacts on plants and animals and biodiversity.” The tribunal cited the aggressive marketing of Roundup, which affects human health, soil health, aquatic ecosystems, micro-organism diversity and the rights of Indigenous peoples.

Question 2: Did Monsanto act in conformity with the right to food, as recognized in international treaties?

The tribunal answered, “Monsanto’s activities have negatively affected food availability for individuals and communities. Monsanto has interfered with the ability of individuals and communities to feed themselves directly from productive land. Monsanto’s activities have caused and are causing damages to the soil, water and generally to the environment, thereby reducing the productive possibilities for the production of adequate food.” The tribunal said communal agriculture and forests are “being devastated by the spread of genetically engineered seeds that use large amounts of herbicides like glyphosate” while restricting food choice, imposing GMO seeds, causing genetic contamination and threatening food sovereignty.

Question 3: Did Monsanto act in conformity with the right to the highest attainable standard of health, as recognized in international treaties?

The tribunal’s answer: “According to the testimonies, Monsanto’s activities have not only negatively affected the physical health of individuals and communities. Monsanto’s conduct has also interfered with the mental health of countless individuals and communities around the world. Moreover, Monsanto’s activities have had a negative impact on the realization of the underlying factors of the right to health, including access to adequate and safe food and water, as well as the enjoyment of a healthy environment.” The tribunal cited the company’s manufacturing of PCBs and other toxic products, the widespread use of glyphosate (the key ingredient in its Roundup herbicide) and the promotion of GMOs despite the lack of scientific consensus as to their safety.

Question 4: Did Monsanto act in conformity with the freedom indispensable for scientific research, as recognized in international treaties?

Question 5: Could Monsanto be held complicit in the commission of a war crime, as defined in Article 8(2) of the Statute of the International Criminal Court, by providing materials to the United States Army in the context of operation “Ranch Hand” launched in Vietnam in 1962?

The tribunal believes the use of Agent Orange by the U.S. armed forces in the Vietnam War “could have fallen under the notion of war crimes” and that the U.S. government “knew or should have known that the use of Agent Orange would cause widespread damage to human health and the environment.” The tribunal, however, said it could not make any definitive finding on Monsanto’s complicity because “no relevant evidence” was provided to it, although it suggests further investigation into the company’s knowledge would be warranted.

Question 6: Could the past and present activities of Monsanto constitute a crime of ecocide, understood as causing serious damage or destroying the environment, so as to significantly and durably alter the global commons or ecosystem services upon which certain human groups rely?

“Ecocide” is not recognized in international criminal law, but the tribunal concluded that if it were, “the activities of Monsanto could possibly constitute a crime of ecocide as causing substantive and lasting damages to biodiversity and ecosystems, affecting the life and the health of human populations.” To support this charge, the tribunal cited the use of its pesticides in “Plan Colombia” (a program that imposes the U.S. military in Colombia as part of the U.S. “war on drugs”); the large-scale use of agrochemicals in industrial agriculture; the engineering, production, introduction and release of genetically engineered crops; and “severe contamination” of plant diversity, soils and water.

Monsanto does not act in a vacuum, nor is it a unique repository of aberrational behavior. The company operates in the global capitalist system. In this system, human rights are subordinated to corporate “rights” to maximize profits regardless of cost.

The current global corporate trade regime bestows increasing rights to multi-national enterprises without any corresponding rights to people or the environment. The ability of governments to establish or maintain laws and regulations safeguarding labor, environmental or health are increasingly restrained as corporations have the right to submit their claims to investor-state dispute settlement (ISDS) arbitration panels with no democratic oversight or appeal. Examining this larger perspective, the tribunal wrote:

“Fundamentally, it is essential in the Tribunal’s view that human and environmental rights be accorded primacy in any conflict with trade or investments rights. Indeed this primacy has been recognized by the international community in the Vienna Conference on Human Rights of 1993, which affirmed that “[h]uman rights and fundamental freedoms are the birthright of all human beings; their protection promotion is the first responsibility of government.”

That concept of human rights, however, is in conflict with the mandates of capitalism — including the relentless competitive pressures that make “grow or die” an imperative. The domination of markets by a small number of behemoths is the inevitable product of that ceaseless competition, behemoths that by virtue of their immense size and command of capital can and do exert dominance over government and civil society. Among agribusinesses, Monsanto happens to be the company that is most ruthless at navigating and further developing these ongoing systemic trends, just as Wal-Mart is the company that is the leader among retailers forcing the moving of production to the lowest-wage countries and exploiting workforces.

One corporation (or any group of corporations) controlling the world’s food supply should be relegated to a fantastic dystopia belonging to the realm of science fiction, not a real possibility in the real world. Everything is reduced to a commodity under capitalism, even life itself. We really can’t do better than this?