There is no country on Earth in which violations of labor rights do not occur. The best rating is for those which are merely “irregular violators of rights,” and only 12 countries managed that.

The International Trade Union Confederation, in its annual Global Rights Index report on the state of labor around the world, has once again provided sobering news. Sixty percent of countries exclude whole categories of workers from labor law, the ITUC report says, indicative that “corporate interests are being put ahead of the interests of working people in the global economy.” The ITUC’s general secretary, Sharan Burrow, said:

“Denying workers protection under labour laws creates a hidden workforce, where governments and companies refuse to take responsibility, especially for migrant workers, domestic workers and those on short term contracts. In too many countries, fundamental democratic rights are being undermined by corporate interests.”

Among the key findings of the report:

To assess the state of global labor, the International Trade Union Confederation, “a confederation” of national trade unions, sends questionnaires to its affiliates in 161 countries and territories representing 176 million workers, with the intention of covering as many aspects of the right to freedom of association, the right to collective bargaining and the right to strike as possible. The information collected is then used to assess whether a given country meets standards set by the International Labour Organization.

These standards are examined by answering “yes” or “no” to 97 indicators arranged in five categories: Fundamental civil liberties; the right to establish or join unions; trade union activities; the right to collective bargaining; and the right to strike. The reason for a binary “yes” or “no” rather than a gradated scale is because “this method reduces the normative subjectivity of the analyst who carries out the coding,” the ITUC said. Further, because each of the 97 indicators is based on “universally binding obligations,” companies and government are required to meet them in full.

When the ITUC first carried out this survey, in 2014, the highest score attained was 43, meaning that no country had even half of its questions answered with a “yes.” In other words, every country in the world flunked.

For the 2017 report, the ITUC did not indicate the range of country scores, but followed its previous format of grouping countries into five tiers. The top tier, in which countries merely “irregular violate” labor rights, consists of 12 countries, which are marked in green on the map below. Eleven are found in Europe, and one in Latin America, Uruguay. (Yellow represents the second tier, followed by progressively darker shades of orange and red, the worst violators.) 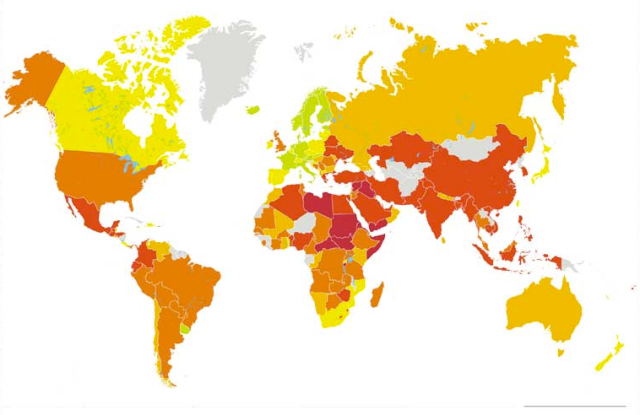 The rankings are as follows:

The United States was also rated a “four” in 2014, while Britain has slipped from being ranked a “three” then. Once again, that means the U.S. and U.K. commit “systematic violations” of labor rights — so much for those governments’ endless attempts to assert moral authority over the rest of the world. The Trump and May governments are not likely to improve upon these rankings. In regards to U.S. deficiencies, the ITUC report says:

“Far from consulting with unions regarding labour law and policy, some states and U.S. politicians have taken deliberate steps to roll back workers’ collective bargaining rights. … The National Labour Relations Act (NLRA) and judicial decisions interpreting the law prohibit workers from engaging in sitdown strikes, partial strikes and secondary boycotts, and impose other restrictions on organisational or recognitional strikes.”

Embarrassingly for a country governed by a party calling itself a “Coalition of the Radical Left,” Greece is among the countries with a ranking of “five.” This ranking is due to harsh restrictions on collective bargaining that were implemented beginning in 2010 through several laws on orders of the “troika” — the European Commission, European Central Bank and the International Monetary Fund — which led to “a significant erosion” of labor rights.

Ironically, the Eurogroup president, Jeroen Dijsselbloem, says that collective bargaining is a “best practice” of the European Union, but the EU continues to block any attempt by the Syriza government to restore labor protections. A proposed law to re-establish collective bargaining was not submitted to the Greek parliament because of troika disapproval.

A sobering reminder of what capitalism offers working people: A race to the bottom and more exploitation. Surely, the world can do better.

5 comments on “No country on Earth fully safeguards labor rights”