The U.S. State Department appears to be cooking the books in its studies of the Keystone XL Pipeline. Could this be a sign that the Obama administration is preparing to approve a project that potentially could be the tipping point for uncontrollable global warming?

Given President Barack Obama’s “all of the above” energy policy, and the State Department’s questionable assertion that the Alberta tar sands would be further developed without the pipeline, there is no time to lose. Tucked away on page 9 of State’s Keystone XL Pipeline final supplemental environmental impact statement executive summary, is this tidbit:

“The updated market analysis in this Supplemental EIS … concludes that the proposed Project is unlikely to significantly affect the rate of extraction in oil sands areas.”

Were that true, extraction of the Alberta tar sands would still constitute a monumental environmental disaster, but a series of studies indicates that canceling the Keystone XL Pipeline would put the brakes on further development. 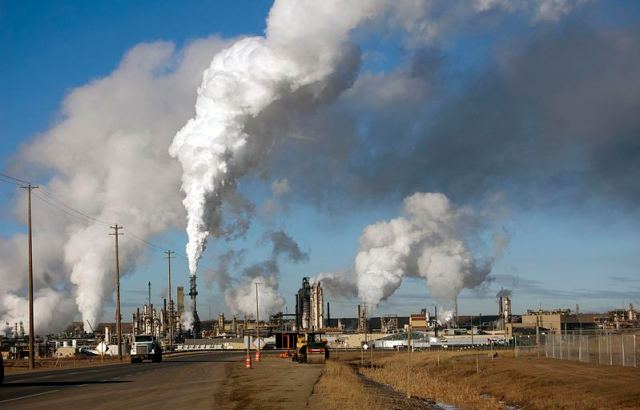 The most recent of these reports, issued on March 3 by Carbon Tracker International, finds that the cumulative amount of greenhouse-gas emissions attributable to the Keystone XL pipeline would be approximately equal to the annual carbon dioxide emissions of 1,400 coal-fired power plants. The study states:

The Carbon Tracker International study concludes that the models used in the State Department’s environmental impact statement “appear incompatible” with the goal of holding the eventual rise in global average temperature to no more than two degrees Celsius. Environmentalists and climate scientists widely predict runaway climate change if temperatures rise beyond that point.

The above figure of about five billion metric tons is a conservative estimate. A discussion in Scientific American says another 240 billion metric tons of carbon would be added to the atmosphere if all the bitumen in the Alberta tar sands were burned, and that all the oil that could be recovered today under current technology represents 22 billion tons of carbon. To put those figures in some perspective, the total amount of carbon thrown into the atmosphere by human activity in all history is 578 billion tons — and one trillion tons would bring the world to the tipping point, according to Oxford University scientists who maintain the Trillionthtonne.org web site.

Oil Change International bluntly says it is “shocking” that the State Department ignored the target of limiting global warming to less than two degrees Celsius “despite the fact that even [State’s] flawed models revealed that the carbon impact of the pipeline could equal as much as 5.7 million cars each year.” The group concludes:

“By avoiding any consideration of climate safety, the State Department report is blindingly clear on one point, if only by implication: the Keystone XL tar sands pipeline is not compatible with a climate safe world.”

Tar-sands oil requires more energy and water than other sources, leaves behind more pollution, and is more corrosive to pipelines. Extracting it therefore generates more greenhouse gases than ordinary production.

A Scientific American article, “How Much Will Tar Sands Oil Add to Global Warming?,” reports that the “Albertan tar sands are already bumping up against constraints in the ability to move their product” and “the Keystone pipeline represents the ability to carry away an additional 830,000 barrels per day.”

The State Department is attempting to duck responsibility by claiming the tar sands would be developed without the pipeline, an assertion not necessarily shared by business proponents. A RBC Dominion Securities report says production would be “deferred” without Keystone XL. TD Bank, one of Canada’s largest, issued a report stating that no further oil expansion is possible without more pipelines. The report said:

“Canada’s oil industry is facing a serious challenge to its long-term growth. Current oil production in Western Canada coupled with the significant gains in US domestic production have led the industry to bump against capacity constraints in existing pipelines and refineries. Production growth can not occur unless some of the planned pipeline projects out of the Western Canadian Sedimentary Basin go ahead.” [page 1]

Economic benefits are misrepresented, too

So the pipeline would enable a major boost to tar-sands production — and global warming. It is not only the environmental impact that is misrepresented, however. Pipeline opponents believe that potential economic gains are greatly overstated by the U.S. government and TransCanada Corporation, the company behind the Keystone XL project.

TransCanada and the American Petroleum Institute go further and claim that the project would create 119,000 (direct, indirect and induced) jobs. A study by the Cornell Global Labor Institute, however, throws cold water on these grandiose assertions. At least 50 percent of the steel manufactured for the pipeline would be made outside the U.S., the Cornell report said, and that, when all effects are calculated, there may be a net loss of jobs. The report said:

“[T]he job estimates put forward by TransCanada are unsubstantiated and the project will not only create fewer jobs than industry states, but that the project could actually kill more jobs than it creates. … Job losses would be caused by additional fuel costs in the Midwest, pipeline spills, pollution and the rising costs of climate change. Even one year of fuel price increases as a result of Keystone XL could cancel out some or all of the jobs created by the project.”

Those burdens will not be borne by TransCanada nor the oil companies, but they will get to keep the profits. Just the way the “market” likes it.