More is never enough. By now we really don’t need yet another statement of inequality, but here goes anyway: The average ratio of chief executive pay to employee pay has reached 335-to-1 in the United States.

And some of the highest paid CEOs were at the companies that stash the most money in overseas tax havens. Among the giant corporations that comprise the Standard & Poor’s 500, the 25 at the companies with the most unrepatriated profits hauled in 79 percent more than other S&P 500 chief executive officers, reports the AFL-CIO union federation’s Paywatch 2016 report. Just 10 corporations — Apple, Pfizer, Microsoft, General Electric, IBM, Merck, Cisco Systems, Johnson & Johnson, Exxon Mobil, and Hewlett-Packard successor HP Inc.  — are believed to be holding about $948 billion in accounts outside the reach of tax authorities.

Being at the top of the corporate pyramid certainly pays — the average S&P 500 chief executive officer hauled in $12.4 million in 2015, while the average non-supervisory worker earned $36,875. That average worker would have to work 335 hours to earn what the CEO makes in one hour. For a worker earning the federal minimum wage, the pay ratio is 819-to-1. 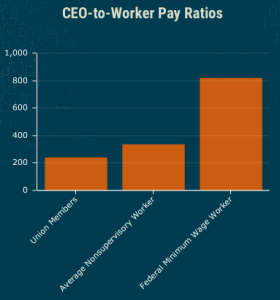 The Paywatch 2016 report illustrated this stark inequality with the example of Mondelez International Inc., where Chief Executive Officer Irene Rosenfeld earned close to $20 million last year, or 534 times the average worker’s pay. At the same time, Mondelez asked workers at a Nabisco cookie and cracker plant in Chicago to take a permanent 60 percent cut in wages and benefits, or their jobs would be moved to Mexico. As nobody could agree to such conditions, hundreds of people were laid off. Ms. Rosenfeld, incidentally, received a $7 million raise for her troubles, likely comparable to the combined pay of the laid-off workers.

Lest we fret that Mondelez may be undergoing tough times, please don’t lose any sleep — the company reported net income of $7.3 billion in 2015 and $15 billion for the past five years. Nor should sleep be lost worrying about Mondelez’s tax “burden” as it paid all of $49 million in U.S. taxes in 2015. That’s a tax rate of less than one percent.

That company is not unique, of course. Workers at Verizon Communications Inc. have been on strike since April 13 as Verizon seeks to move call-center jobs overseas, outsource instillation work to low-wage, non-unionized contractors, and reduce benefits. Verizon wants to stick it to its workers despite racking up $45 billion in net income over the past five years, at the same time paid no taxes and has stashed $1.3 billion in offshore accounts.

Avoiding taxes has become an art form for U.S. corporations, especially those who operate as multi-nationals. Dodging taxes is simply another “capitalist innovation,” and so common that a single small building in the Cayman Islands (where the corporate tax rate is zero percent) is the registered address for almost 19,000 corporations. Tax dodging also means higher pay for top executives — yet another corporate subsidy.

This goes beyond simple unfairness, although corporate tax collection in the U.S. has declined drastically, falling from about one-third of U.S. government tax receipts in the 1950s to 10 percent in 2015; it was as low as 6.6 percent in 2009. Nor is it simply that less taxes collected reduces the ability of governments to effectively provide an adequate social safety net. Higher taxes actually lead to more jobs. Countries that provide more subsidies toward services that are complementary to work — such as child care, elder care and transportation — have higher workforce participation rates. Yes, contrary to orthodox economics, higher rates of taxation lead to more employment.

Let’s not reduce all this to simply greed. The relentless competition endemic to capitalism mandates that corporations engage in an endless race to the bottom. “Grow or die” is an inescapable mandate — if you don’t grow, your competitor will and put you out of business.

That’s a war that working people can never win. Class warfare rages hotter than ever, but there is only one class that is waging it.

10 comments on “Millions for the boss, cuts for you”