Class warfare is poised to reach a new milestone as this year’s combined total of dividends and stock buybacks by 500 of the world’s largest corporations will exceed US$1 trillion.

So large is that figure that, for the second year in a row, the companies comprising the S&P 500 Index (a list of many of the world’s biggest corporations) will pay out more money in dividends and stock buybacks than the total of their profits. Yes, times are indeed good for speculators. Not so good for employees — you know, the people who do the actual work — whose pay is stagnant or declining so that those at the top can scoop up still more.

Although dividends, a quarterly payment to holders of stock, are steadily increasing, the increase in stock buybacks has been steeper. The total of these has tripled since 2009 as financiers and industrialists feverishly extract as much wealth as they can. This is part of why the “recovery” since the 2008 economic collapse has been a recovery only for those at the top.

In short, a buyback is when a corporation buys its own stock from its shareholders at a premium to the current price. Speculators love buybacks because it means extra profits for them. Corporate executives love them because, with fewer shares outstanding following a buyback program, their company’s “earnings per share” figure will rise for the same net income, making them look good in the eyes of Wall Street. Remaining shareholders love buybacks because the profits will now be shared among fewer shareholders.

Wall Street and corporate executives both win! Hurrah! Who could by hurt by this? Oh, yes, the employees. They’ll have to suffer through pay freezes, work speedups and layoffs because the money shoveled into executive pay and financial industry profits has to come from somewhere. This sort of activity helps buoy stock prices. So does the trillions of dollars the world’s central banks have printed to sustain their “quantitative easing” programs.

We’re not talking loose change here. The U.S. Federal Reserve pumped $4.1 trillion into its three rounds of quantitative easing; the Bank of England spent £375 billion; the European Central Bank has spent about €1.34 trillion; and the Bank of Japan has spent ¥220 trillion so far. That’s a total of US$8 trillion or €7.4 trillion. And the last two programs are ongoing.

The supposed purpose of quantitative-easing programs is to stimulate the economy by encouraging investment. Under this theory, a reduction in long-term interest rates would encourage working people to buy or refinance homes; encourage businesses to invest because they could borrow cheaply; and push down the value of the currency, thereby boosting exports by making locally made products more competitive.

In actuality, quantitative-easing programs cause the interest rates on bonds to fall because a central bank buying bonds in bulk significantly increases demand for them, enabling bond sellers to offer lower interest rates. Seeking assets with a better potential payoff, speculators buy stock instead, driving up stock prices and inflating a stock-market bubble. Money not used in speculation ends up parked in bank coffers, boosting bank profits, or is borrowed by businesses to buy back more of their stock, another method of driving up stock prices without making any investments.

The practical effects of all this is to re-distribute income upward. That is the raison d’être of the financial industry.

What else could be done with the vast sums of money thrown at the financial industry? In the U.S. alone, home to a steadily crumbling infrastructure, the money needed to eliminate all student debt, fix all schools, rebuild aging water and sewer systems, clean up contaminated industrial sites and repair dams is estimated to be $3.4 trillion — in other words, $700 billion less than the Federal Reserve spent on its quantitative-easing program.

The British think tank Policy Exchange estimates Britain’s needs for investment in transportation, communication and water infrastructure to be a minimum of £170 billion, or less than half of what the Bank of England spent on its QE scheme.

Borrowing to give more to speculators

To return to the $1 trillion in dividends and buybacks, a research report by Barclays estimates that those payouts by S&P 500 corporations will total about $115 billion more than their combined net income. As a Zero Hedge analysis puts it:

“[C]ompanies will promptly send every single dollar in cash they create back to their shareholders, and then use up an additional $115 billion from cash on the balance sheet, sell equity or issue new debt, to fund the difference.”

Near-zero interest rates, another central bank policy that favors the financial industry, have enabled this accumulation of debt. Debt not for investment, but simply to shovel more money into the pockets of financiers and executives. But debt can’t increase forever, and someday, perhaps in the not too distant future, central banks will raise interest rates, making debt much less attractive. The Barclays report calculates that 2015 also saw buybacks and dividends total more than net income; the last time there was consecutive years in which this happened were 2007 and 2008. 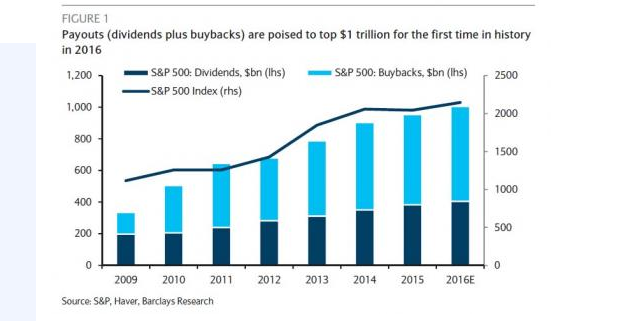 It would of course be too simplistic to interpret this metric as a signal that an economic collapse on the scale of 2008 is imminent, but is perhaps a sign that the latest stock market bubble may be close to bursting.

Another signal that trouble may be looming is that money is now being shoveled into bonds, a sign that confidence in the stock market is waning. A New York Times report suggests that European and Asian investors (the Times of course is much too genteel to use the word “speculator”) are pouring so much capital into U.S. bond markets that a bubble is being inflated there as well. These speculators are seeking higher returns from bonds floated by U.S. corporations than they can get at home. The Times reports:

“The surge in flows echoes a wave of investment in the years right before the financial crisis, when mostly European investors snapped up billions of dollars of mortgage-backed securities before the American housing market imploded.

The current numbers are also arresting. According to [former Treasury Department official Brad W.] Setser’s figures, about $750 billion of private money has poured into the United States in the last two years alone.”

Setting aside the touch of xenophobia in it, the Times report does at least broach the subject of under-investment. And wealthy investors possessing far more money than can possibly be invested is hardly an unknown phenomenon. As an example, let us examine Wal-Mart, which racked up more than $16 billion in net income for 2015 and seems poised to better that this year.

The Walton family, heirs to founder Sam Walton, owns about half of Wal-Mart’s stock and receive a corresponding share of the billions of dollars in dividends the company pays yearly. It also spends billions more buying back stock annually, an indirect help to the Waltons. This is a company notorious for dodging taxes while paying its employees so little they require government assistance, and is the recipient of vast amounts of government handouts.

The Waltons make tens of thousands times what their ill-paid employees earn. They certainly don’t work tens of thousands harder — or even work at all, as the billions roll in just for being born into the right family. Wal-Mart is far from alone, but does provide an exemplary example of class warfare. An estimated $1 trillion a year goes to corporate profits that once went to wages, according to a PBS Newshour report.

The harder you work, the more the boss, and financiers, make. What sort of system is this?

13 comments on “Work harder so speculators can get more”