The World Bank is in the process of completing its “World Development Report 2019: The Changing Nature of Work” and, surprisingly, the latest draft version opens with quotes from Karl Marx and John Maynard Keynes. Has the World Bank suddenly lost sight of its purpose and will now take up the cause of working people?

Well, you already know the answer to that question, didn’t you?

Only a few paragraphs down we begin to see where this paper is heading. After a bit of perfunctory hand-wringing over disruptions caused by robotics, we read the problem is “domestic bias towards state-owned or politically connected firms, the slow pace of technology adoption, or stifling regulation.” And although some jobs are disappearing, fear not because “the rise in the manufacturing sector in China has more than compensated for this loss.”

Oh, so we should all move to China to get new jobs.

Never mind that the highest minimum wage for Chinese workers, that mandated in Shanghai, is $382 per month. In some places the minimum wage is half that, if workers are fortunate enough to be paid regularly. And that millions of rural Chinese are being driven into cities to become sweatshop workers, so for now there won’t be enough work for the rest of the world. Then again, letting bosses have the upper hand is what the World Bank has in mind. No, its economists haven’t forgotten what the institution’s purpose is nor why it exists.

A Chinese-owned factory in Lesotho (photo by K. Kendall)

So what to do? The World Bank report does suggest not allowing corporations to dodge taxes to the degree that they do. Very well, but even if taxes were collected at the statutory rates, that would still leave corporations vastly under-taxed. No suggestion by the bank, of course, that corporations actually pay a fair tax rate. Corporations currently account for a paltry nine percent of U.S. tax receipts; in the 1950s, they accounted for 30 percent or more. Similarly, in Canada personal income taxes account for three and a half times more revenue than do corporate income taxes; these were equal in 1952.

There is much discussion of “investing in human capital,” a particularly favored mantra of the World Bank. What does that mean? Capitalists are likely to interpret such talk — rather common in NGO circles these days — to mean demanding more skills or degrees from prospective workers, but in the United States graduates with doctorate degrees are being forced to take jobs in academia as part-time adjuncts, and plenty of folks in other fields are “over-educated” already for the jobs they hold. This concept comes from the idea that the problem is that there aren’t enough skilled people for all those wonderful jobs that are out there, just over the rainbow. But in the real world, as opposed to Right-wing think tanks, that is not so.

A 2014 report issued by the National Employment Law Project found that higher-wage jobs were created at a much lower rate during the “recovery” from the 2007-08 economic collapse than had been lost; conversely, low-wage jobs (paying less than $13.33 per hour) were created twice as fast as they had been lost. In separate studies, the Economic Policy Institute found that long-term unemployment is elevated for workers at every education level (and was increasing at a somewhat higher rate for those with some college or a four-year college degree than the average), and that the so-called “skills mismatch” is a myth.

So we come to the real “solution” in the minds of World Bank officials: Cut worker-protection laws.

Aw, you really aren’t surprised, are you? 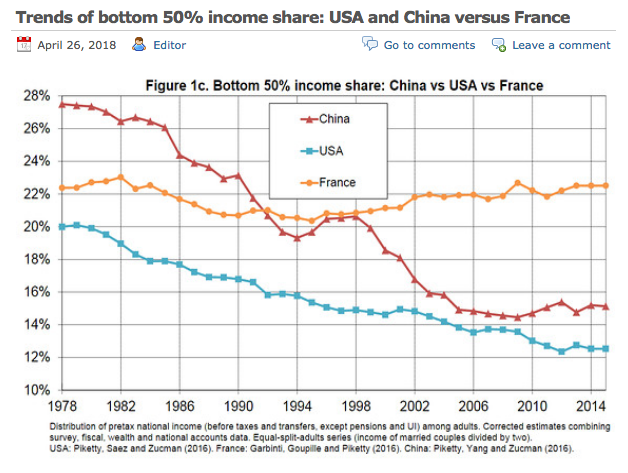 Here’s a key passage in the report: “Rapid changes to the nature of work put a premium on flexibility for firms to adjust their workforce, but also for those workers who benefit from more dynamic labor markets.”

Dynamic for who? What we have here are code words meaning make it easier to fire people. And that’s the real takeaway message, no matter the lofty rhetoric about governments creating a new social contract. “Creating jobs” and “investing early in human capital” are two elements of the World Bank paper’s suggested new social contract. Unfortunately, there are no thoughts on how new jobs might be created when capitalists are in a frenzy of eliminating jobs to maintain their profit rates and survive relentless market competition. More schooling, which is what “investing early in human capital” amounts to, is fine by capitalists, as long as they don’t have to bear any of the costs. It’s up to students to take on more debt to create this new “human capital.”

Contrast this happy talk with the reality of the capitalist workplace. A report just issued by Democratic U.S. Representative Keith Ellison found the average ratio of CEO-to-median-worker pay is 339-to-1. That ratio among the 500 biggest U.S. corporations is as high as almost 5,000-to-1. Nope, I don’t think the boss works thousands of times harder than you do. At McDonalds, for example, the CEO’s annual salary could be used to pay the yearly wages of 3,101 workers making the chain’s median pay.

The sort of societal priorities and imbalances of power that enable such appalling inequality might be summed up by the uses to which money is put. In Los Angeles, a new football stadium is being built and the estimated cost of it is now estimated at $4.9 billion. That figure has risen considerably and likely will again. Given all the homelessness in Los Angeles, and all the other social problems, what could have been done with $4.9 billion?

The number of homeless people in California is estimated at 130,000. Doing something about that might be one way to “invest” in human development, and doing so might even save money. A Rand Corporation study carried out for Los Angeles County found that homeless people who are provided stable shelter make fewer trips to the emergency room and are arrested less frequently, to the extent that the cost of the housing is more than offset.

Oops, but that’s not profitable for the well-connected as throwing money at stadium boondoggles or cutting jobs. But if you earn enough degrees, perhaps you’ll fulfill the World Bank’s prophesy by landing a job at a Chinese sweatshop.